Seal of My Dreams

All proceeds from sales of SEAL of My Dreams go to the Veterans Research Corporation, a non-profit fundraiser for veterans’ medical research.

Honor, duty, courage, passion . . . the men of the Navy SEALs are a special breed of hero, and in these novellas by eighteen top romance authors the SEALs are celebrated not only as symbols of devoted service to their country but as the kind of men every woman wants to love. They’ll rescue a damsel in distress and her lap dog, too. They’ll battle hometown dramas and international bad guys. When it comes to giving away their hearts, they’ll risk everything.

Between them, the authors of SEAL of My Dreams have won dozens of writing awards including multiple RITAs from Romance Writers of America. Their nearly 600 published novels have sold at least 35 million copies worldwide. The SEAL of My Dreams roster includes many of the best-known authors in modern romance fiction. In addition, many have strong family connections to the servicemen and women of our nation’s military, and many specialize in novels featuring heroes and heroines from all branches of service. 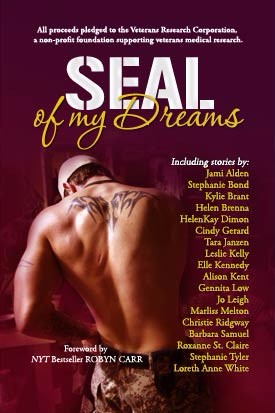