From the bestselling and award-winning authors of Dragon Lovers comes an anthology of fantasy, romance, and eternal love. In these four novellas, history and destiny spark passion, and everything depends on the fate of one mystical cup: the Holy Grail.

A young woman must find her love to summon the Grail to bring peace to England; a Regency lady must keep it safe from Napoleon’s spies; a modern sorceress must keep the Grail from falling into Nazi hands, and an American must put the chalice at risk to rescue her one true love. These are four passionate and enchanting stories of desire and destiny inspired by one of our most powerful legends.

Alice Magill peered into the pearl gray fog that swirled around the garden of her freshly rented flat in an English village. Over the ancient wall bounding the property was an old woman, stout and bespectacled. She wore a dark blue sweater and a rain hat.

“Well, yes, that too, but the garden is what I meant. All manner of things come and go through there. I reckon you’ll want to be careful at dusk, miss.”

“Ah.” Alice carefully tucked her skepticism beneath a polite smile. “What kind of things?”

“Cats for one thing.” The woman caught sight of something behind Alice. With a wave of her hand, she said, “Shoo!”

Alice turned to see a big black and white cat, very well-tended, sitting on a stone bench, his long fluffy tail curling and uncurling in typical cat boredom. He did not seem to mind the old woman’s dislike. As if he were raising a brow in silent complicity with Alice, his left whiskers twitched ever-so-slightly.

“You’d think that, wouldn’t you?” She tossed a twig toward the cat, and he dashed into the bushes. “They’re not harmless, Miss, and I’d watch them if I were you.”

“American, then, are you?” The woman leaned in more curiously. “What brings you here? Are you studying at the Foundation? That’s what usually rents those flats, students and teachers.”

“Guilty.” Alice tugged off her thin gloves and walked over to the wall. The old woman was probably lonely, looking for a little conversation. Nothing wrong with that. “My name is Alice Magill. I’m here to do some graduate work in literature.”

“Oh, all of that nonsense is over my head, but welcome anyway.”

“Oh, no, my dear. I have to get my garden to bed before the freeze.”

“All right. Thanks for the warning. About ghosts and cats. And things.” Alice turned back toward the old manor house where she had rented a flat only two days before. The 14th century building came complete with mullioned windows, a pelt of thick green ivy and climbing roses, and a moat. A moat with actual water in it, which alone would have cinched her selection.

Under the current light conditions, the possibility of a haunting seemed not only possible, but likely. Fog drifted in clouds of mysteriousness, showing a clump of white asters nearby a stone bench, then parting to illuminate a single yellow rose on the vine climbing around her bedroom window. So beautiful!

Gratitude rushed into her chest. As long as she could remember, Alice had dreamed of traveling to England. Born to a sprawling Irish-American family in Chicago with more love than money, she had put herself through college, then graduate school, and now had saved enough to come to this little village and its Foundation for the Study of English and Scottish Ballads, to study the link between the legend of the Holy Grail, the famous lyric poem, the Romance of the Rose and a ballad said to have been written in the pub on the high street.

As if that were not enough, she was studying and teaching her favorite legends, all rooted right in these green lands. Life, she thought with a happy sigh, didn’t get any better than this. Some—her extremely superstitious Irish grandmother among them–might say she ought to be watching for the other shoe to fall out of the sky and give her a black eye, but Alice ascribed to a cheerier superstition: if you listened to your heart, it would lead you where you were meant to go.

Some said that made her naïve. But they were stuck back in the sharp winds of the Midwest while here she was collecting flowers from a centuries-old garden for her kitchen table. With a pair of heavy-handled scissors she’d found in the kitchen drawer, Alice clipped a fistful of blue asters and pale chrysanthemums, and then headed toward the back door. Up the back of the house climbed the rose bush, glossy dark green against the soft gray day. The roses were nearly spent, but a few still bloomed bright yellow. She reached for one, a little bit over her head—

Movement at the edge of her peripheral vision caught her attention. Alice turned in time to see…something…distinctly skitter through the trees. She caught a flash of scarlet, the impression of long black hair, and then the fog closed around her so completely that she felt as if it were a blanket, smothering and too close.

She might as well have been blind. Panic clutched her throat, as she spun around in a circle, seeking a marker of any kind with which to orient herself. Nothing. She made a decision and headed for the back door.

Or at least she thought it was the back door. Instead, she stumbled over a round clump of aromatic lavender and fell, face first, in the wet grass. Flowers went flying from her basket, her teeth clicked together painfully, and she jarred her right elbow. The wind was knocked out of her, adding to her panic, and she felt like she might pass out, right there in the garden.

Maybe she thought, struggling to take a breath, her grandmother was right.

Alice struggled to obey, but it felt as if two fists were squeezing her lungs tight. The edges of her vision begin to blacken, which sent her spiraling into absolute terror, even though some distant part of her brain knew that passing out would be the end of the whole drama because she’d relax. Her body would take over and do what was required.

“Breathe!” said a man’s voice, and a blow struck her between the shoulder blades, startling enough that Alice sucked in a giant breath. Air filled her lungs, then flowed out, and she coughed.

She sat up, turning to thank her rescuer, but the fog was so thick she still could see nothing. “Thank you,” she said.

No one answered. The cloud shifted ever so slightly, and she thought she saw a foot in a soft leather shoe, but then it was swallowed again.

Uneasy, Alice went to all fours and gathered the flowers that had scattered when she fell. The basket could wait, since she couldn’t see it anyway, and the scissors would likely rust, but she wasn’t going to risk another tumble. Getting to her feet, she stepped carefully. Eventually she would come to the wall, the moat, or the back of the house. All sound was muffled, but she could distantly hear the water in the moat chuckling along its way. It was at least a point of orientation.

Moving cautiously, she peered into the dense air, and finally spied a single gleam of yellow, like a torch in the gloom. It was the rose against her kitchen window, dewy and bright. It led her the last few steps to the door safely.

Only then, with her palm flat against clammy bricks, did she look back into the fog-shrouded garden. Who had helped her?
Maybe the garden was haunted. A cold shiver crossed her shoulders, rushed down her spine.

After her class tomorrow, she would poke around the library for some research on the house. Who knew what dramas and lost loves she might uncover? 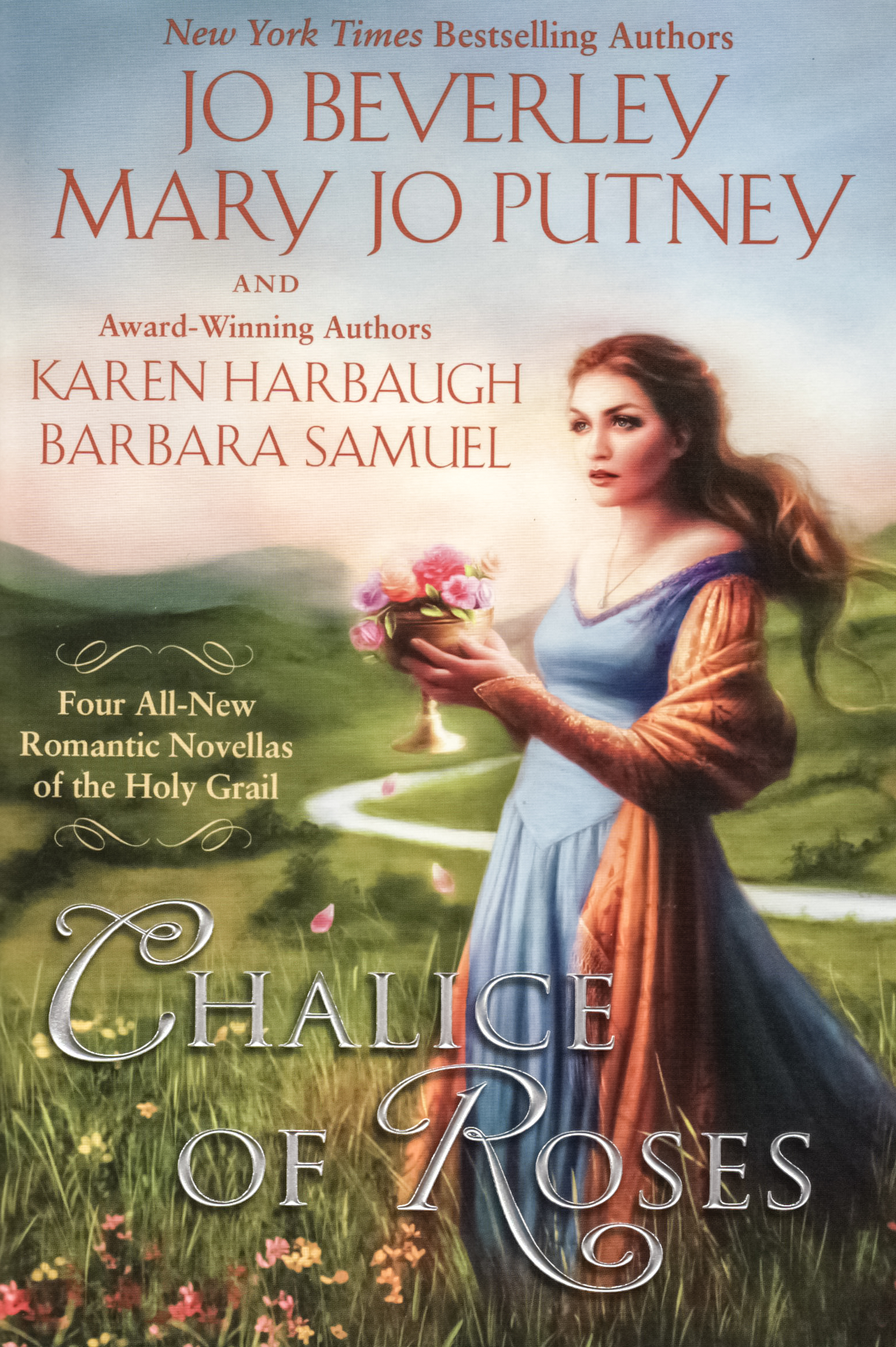 “VERDICT: This beautifully crafted anthology by some of the genre’s best is graced with flawless writing, touches of humor, and magical, creative plots.”