Lady Cassandra St. Ives had sworn off marriage ever since becoming a happy widow, but lately her affections have been engaged by a mysterious, long-distance correspondent. Cassandra has shared her soul with her far-off admirer, and when he invites her to visit his home she accepts the invitation gladly. Expecting a kindly old gentleman, Cassandra is stunned to find that Count Basilio Montevarchi is a virile man in his prime who knows her heart’s most intimate desires–and is only too willing to fulfill every one…

The moment Basilio sets eyes on the vibrant beauty he recognizes a soul mate he will never be able to claim as his own. A long-standing betrothal – and the honor of his family–dictate that Basilio must deny the force of their passion until the confines of responsibility finally force them apart. Now Basilio must find a way to keep his heart’s desire–before he loses her forever.

THE STORY BEHIND THE STORY

The St. Ives family series of books was conceived in a group – the entire family and their history came to me one afternoon sitting on my porch on a summer afternoon. I filled an entire notebook with my scribblings in a few hours, something I’ve never done before.

(I should add that I’d been on a Georgian research kick after discovering the story of an obscure and fascinating composer, Joseph Boulogne, The Chevalier St. George, and trying to find out more about him for months — quite a lot of pieces of Joseph’s life show up here. Hint: look at Gabriel for clues).

Anyway, I knew that Adriana in THE BLACK ANGEL would be the first book, and when I pitched the series to my editor, I wrote a quick synopsis of what I thought would be the second book — Phoebe’s story — too.
But when it came time to write the second book in the series, I found it was the tortured Cassandra in my heart. Her sorrow haunted me a bit through Adriana’s tale and I wondered what had formed her, and what sort of man would capture her resistant heart–this independent and rather prickly soul who values her independence more than all the love in the world?

The answer came to me in a dream. Now, I know many writers swear by this formula, but I am sadly not one of them. There have only been two other times in the entire history of my writing career (which now spans almost two decades–yes, I started as a wee, wee babe!) when a dream revealed what a book would be, and both times, it was a character who came to me. This time, it was an entire book–structure, character, conflict, everything, all told in letters between a beautiful count and the sorrowing Cassandra, and a strangely wonderful character who captured my heart, Analise di Canio, who plays an extraordinary part.

That gloomy February morning, I did my best to capture those letters from my dream, and the book was born. Most of them did not make it into the actual book, because I found I was more interested in what happened to them–this trio of players who are all bound by honor, who are led, in strange and beautiful ways, to the fulfillment of each of their most heartfelt dreams.

It was not an easy book to write, I must admit. After that first, illuminating dream, I had to work very hard to coax the truth of it out of a trio of characters who were stubborn and idealistic and not always terribly cooperative–but in the end, it’s a book I love a great deal. It’s an exploration of passion and the nature of vocation, but it’s also about faith—faith lost and found, faith in ourselves and in others and in hope itself.

If you’re looking for a sexy, intensely emotional roller-coaster ride, I hope you’ll take a look at NIGHT OF FIRE. As always, I love to hear your reactions. Email me!

She told herself that she had recovered. That she was a woman of the world and did not fall to pieces over a doomed romance. But the moment she saw him, when he walked into a box across the opera hall, she knew she had lied to herself.

Cassandra had caught a cinder in her eye and bent her head, blinking madly against it. When she looked up again, there he was. Out of place, and so unexpected that she gaped for a long, silent moment before she could fit her mind around the fact that it was him.

Basilio.
Here, at the opera.
In London.

A blackness prickled at the edges of her vision. She realized she had not breathed, and inhaled deeply, but she could not look away. Behind him was a man she vaguely recognized, a ruddy-faced lord from a county nearby Hartwood, which only made it all the stranger.

Two women had settled at the front of the box, but the men continued some deep discussion, their heads bent together, one graying, the other darkest black.

A flash of memory: Cassandra’s hand, white as moonlight against the jet of his hair, the curls leaping around the turn of her finger –

Her brother Julian, who had insisted upon this jaunt, leaned closer. “I’m sorry-I didn’t quite hear you.”

She put her hand on his sleeve, trying to remember how to arrange her expression normally. “Nothing.”

In the box across the crowded, noisy room, Basilio nodded seriously at something, and his hand settled in a quieting sort of way upon the shoulder of the small woman who sat nearby. She seemed hardly to notice. Even across such a distance, Cassandra read discomfort in her stiffness.

Abruptly, Cassandra stood, her limbs quaking. “Julian, I feel quite ill. I must go.”

He leapt to his feet, solicitous, his arm circling her shoulders. “What is it?”

She waved a hand, bent to capture her shawl from the seat, and dropped it when her betraying fingers could not hold on to it. She stared at it, beads glittering along one edge. It looked like water, she thought distantly, the way it shimmered in a pool there on the dark floor of the box. It made her think of another shawl, on another floor, and she closed her eyes against the pain of that memory.

How could a week have changed her life so utterly? A single week, torn from the thousands and thousands that made up her life. Forty times that number had passed since then, and none of them had changed her, turned her inside out, made her into a woman she no longer always recognized.

Julian swept up the shawl for her and captured her hands, bending to frown closely. “You’re shivering like a wet puppy!” Bracing her elbow, he said, “Let’s get you home.”

“Yes.” She vowed to keep her eyes lowered, but the temptation was too great. One more glance at him. Only one.
But of course it was the dangerous one. For across that vast bowl of masonry and wood, across the milling scores of humanity in the gallery below, Basilio chose that moment to raise his head. Their eyes locked, and Cassandra’s heart simply burst, flooding her chest with the scarlet blood he’d drawn with his gentleness, with his passion, with his words.

With his love. Yes, his love, most of all.

She fancied his face went pale, though it was impossible to see anything of the sort across such a distance. His hand still rested upon the shoulder of the woman, and she saw him take it away, hastily, as if it burned him.

It gave her courage. Tossing her head, a head of very red hair she knew glowed bright as copper, bright as sunlight, even in the darkness, she said calmly, “Please take me home, Julian.” 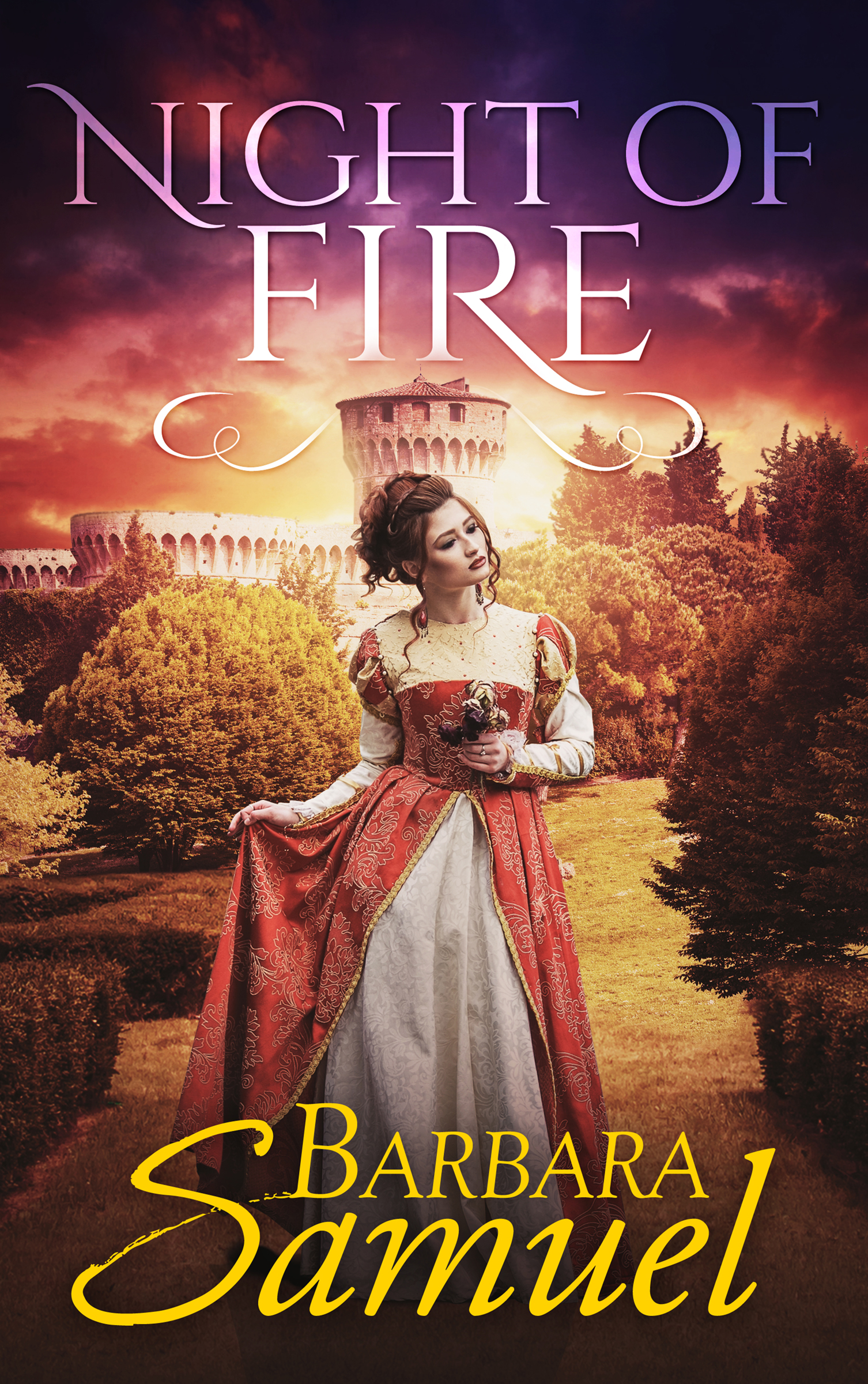 “A beautiful novel, seamlessly executed, cathartic in the way of tragic love stories, yet even more satisfying for the triumphant finish that rewards Basilio and Cassandra’s honor pledged in love.”