A taste of heaven…

Ardor once foolishly led Lady Adriana St. Ives into the arms of a rake, an affair that cost her everything she held dear. Though that was five years ago, this golden English beauty still vows that no man will ever again ignite the sensual passion hidden deep in her soul–not even her new husband, Tynan Spenser, Earl of Glencove, a darkly handsome and rich Irish rogue.

Known as “The Black Angel” for his wild ways, Tynan is as determined to melt his icy bride as she is to resist his seductive charms. Vowing that she will be his in just one hundred kisses, Tynan sets out to win her with a kiss each day–a challenge Riana is sure she can withstand. But the willful beauty has no idea of the power of a single kiss…

Lady Adriana St. Ives rode well, the result of a childhood spent more savage than civilized. On this dark, wet morning, she rode astride, and rode hard, her hair uncombed and streaming down her back as she raced to beat the dawn threatening at the edge of the horizon. Wet leaves slapped at her face and arms, and her skirts were soaked. Later, she would pay with a fever.

But all that mattered now was that she halt the folly about to take place here, a duel between her brothers and Everett Malvern, Baron of Wye, the king’s nephew, and until last week, Adriana’s lover.

“Please,” she whispered to whatever celestial beings might still be listening to her.

She broke from the trees into a wide, grassy clearing. Relief washed cold down her spine, for they had not yet begun. Her brother Julian, tall as a cedar, his wheat-colored hair shining even in the gloom, stood sober and straight beside a phaeton. Their half-brother Gabriel, as handsome and swarthy as the pirates of their childhood games, stood next to him, the box of pistols in his hands.

She slowed, her breath coming in ragged gasps from her chest. Not even enough air left for a cry.
And then movement from the trees on the opposite side of the clearing caught the edge of her vision and Adriana jerked her head around to see Everett Malvern. The rake was visibly in his cups, weaving as he tossed off his woolen cloak and gestured for his pistol to be put in his hand. The fine satin waistcoat and breeches that had begun the night before in such splendor were now stained with the night’s revels, and the elegant, almost pretty face framed with golden curls was decidedly less attractive by the morning light. His sleeves, trimmed with tumbles of Belgian lace, fell over his hands, and he laughed uproariously to his entourage, who only summoned the most polite of chuckles in response. They knew, even if Malvern did not, that he faced a most deadly — and furious — opponent.

Adriana narrowed her eyes. The fool. Only he was arrogant enough to think he’d go unwounded at Julian’s hand. His second, a foppish dandy named Stead whom Adriana disliked heartily, plainly understood the danger. He tugged at Malvern’s sleeve, his mouth moving with words Adriana could not hear. Malvern shook the hand away and swaggered out to face Julian, who stood cold and still in the midst of the clearing, his dark gold hair glittering with moisture.

Humiliation and anger and regret welled up in her, but there was no time to indulge it. “Wait!” she cried, dismounting, and ran forward.

The men glanced at her, but quickly turned back again, all intent upon this foolish duel. She tried to rush, tripped on her skirts and tumbled in the wet grass. The jolt slammed her teeth together, and jarred her entire head.

She scrambled to her feet, putting her hand in a muddy puddle, and stumbled forward.
Too late.

In horror, she halted, tasting blood on her tongue where she’d bitten it. Sweat and cold mist dampened her clothes, and her breath still came raggedly. Hands limp at her sides, she watched them take their paces.
Turn.

Involuntarily, she slammed her hands over her ears and squeezed her eyes closed. A man cried out in surprise. Her eyes flew open.

Blood bloomed in the shape of a peony over Malvern’s chest. Adriana saw the stain leak into the embroidered satin of his waistcoat, spreading like doom, saw the surprise steal away his drunkenness. Abruptly unfrozen, she raced forward and grabbed Julian’s arm. “God, Julian, you’ve killed him! You killed the Duke’s bastard.”
Julian dropped the pistol and the icy calm over his face shattered. He raised gray eyes to Adriana’s face, and in them she glimpsed misery and resolve. “He’ll trouble you no more.”

She flung her arms around him, weeping. “I am so ashamed,” she whispered against Julian’s neck.
Gabriel touched her back, her hair, and she embraced him fiercely. “Take care of him,” she whispered, then pulled away. “Now, go. Go!” Without a word, they turned as a man, and disappeared into the mist of the dark morning. 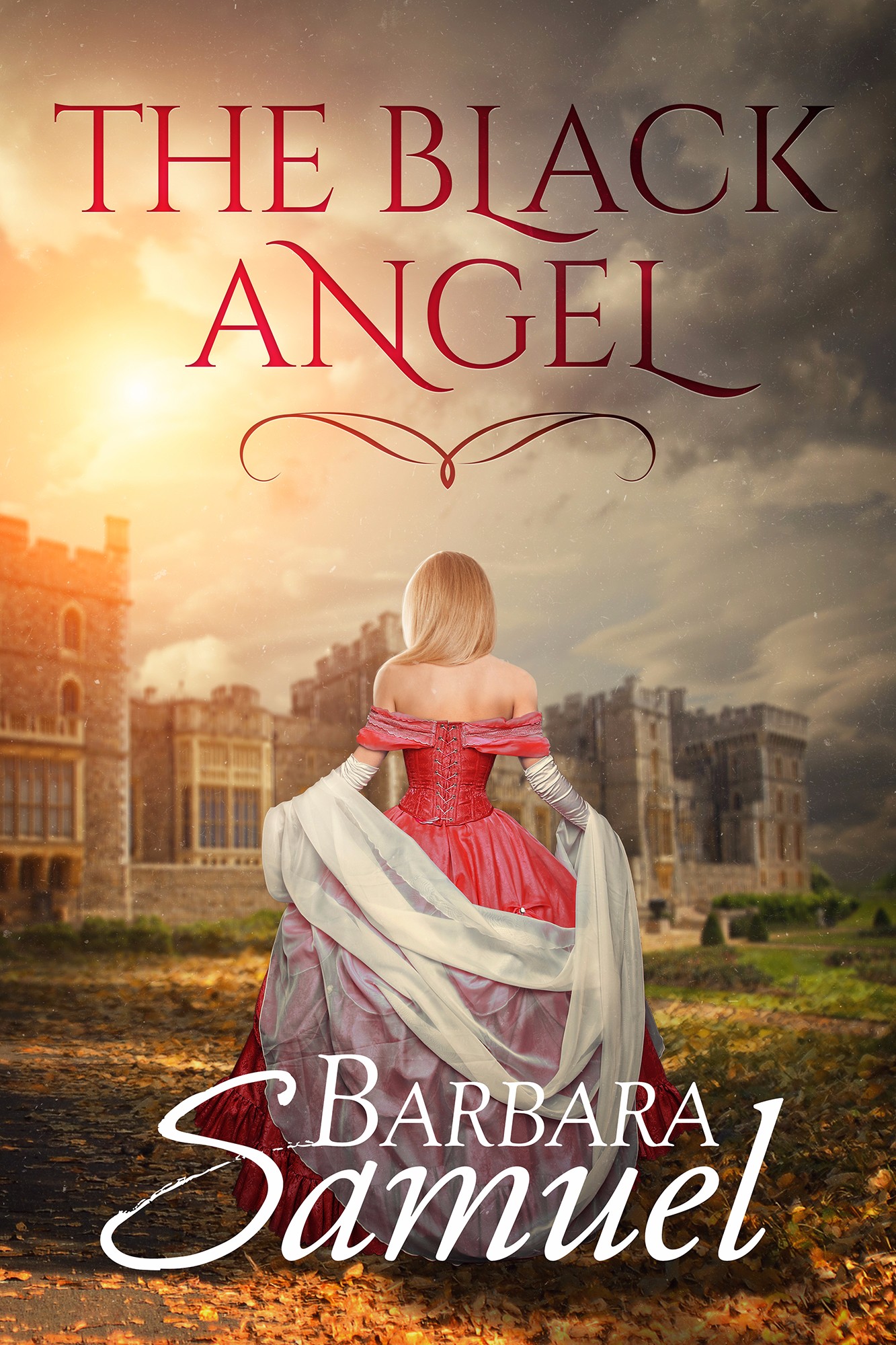 “A dazzling, sensual tapestry…Barbara Samuel proves once again that she is one of the most gifted romance writers.”

TOP PICK & 4 1/2 stars: “There’s plenty of underlying, potent sexuality and intense emotions in THE BLACK ANGEL. Ms. Samuel skillfully draws the reader into the story. Her indelible characters and powerful plot are enhanced by the well-drawn backdrop and hint of suspense. This is a must read for anyone craving a hard to put down, moving romance.”

“The Black Angel is one of the very best historical romances I have read this year. I do not hesitate to recommend it to any and all. It is a superb book – simply superb.”

-Ellen D. Micheletti, All About Books

“THE BLACK ANGEL by Barbara Samuel is an emotionally intense and sensual romance featuring a gathering of highly unusual and complex characters…Ms. Samuel’s intimate and passionate characterizations that most compel the reader ever onward. No praise is too high for THE BLACK ANGEL.”